to remove this notice and enjoy 3reef content with less ads. 3reef membership is free.

The Origins of '3reef'

3reef came online in 1996 as 'Three Steps To A Reef Aquarium.' This title was created by 3reef founder Matt Rogers as an attempt to overcome the common fears associated with keeping a reef aquarium, especially at that time. The site consisted of the 'Three Steps' - an introduction to keeping a reef aquarium written by Matt that covered water, livestock and hardware. Although dated now, much of it is still valid with regards to husbandry and initial purchases. You can read it here: Step 1 or visit the old sites by clicking the image on the left.

By 2002 a forum was added and thus began the 3reef community that has now grown to over 23,000 members and over 1 million posts. The site itself now contains many new sections including photo galleries, aquarium calculators, member-submitted reef-keeping articles and more. 3reef has one of the most advanced forums on the Internet with user-selected skins, custom profiles and many innovative ways for members to retain information found on the forums including custom lists. 3reef has become popular, yet 3reef still retains its roots and remains a friendly forum for new people interested in aquariums and veteran hobbyist alike. 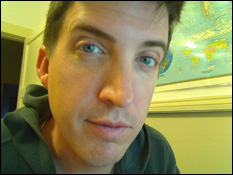 Matt Rogers cannot rattle off a bunch of Latin names of corals, but he will give advice when he can back it up. Although he has had aquariums since he was a little kid, he still makes mistakes occasionally from over-dosing to impulse buys. He should follow his own advice more. Judging from his clothes, his girlfriend says he is color-blind. He can tell you what he ate for lunch by looking at his shirt. That said, he loves aquariums and the outdoors. Matt created 3reef after working for a custom Aquarium shop in Manhattan - Age of Aquariums - in the mid-1990's. In addition to the 3 Steps, Matt has written several articles for 3reef over the years including Low Impact Aquariums, Water Changes, Refugiums, Sand and more. He has had many aquariums from planted to turtle tanks. He currently has a Neo Nano reef aquarium. Some of his reef aquariums in the past include this 30 long and this 20 long. 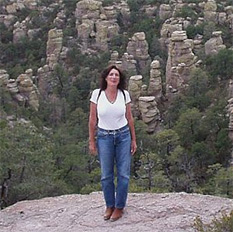 In 1987 I purchased my first saltwater tank and I have been hooked ever since. The tank was home to Blue Damsels and Condy Anemones, I ran an undergravel filter and fluorescent lighting and the tank flourished. Over the years I have realized it's the biology and beauty of simple tanks that I enjoy. When not working I can be found outdoors on land and in the water. 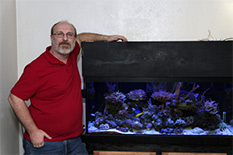 I have been a golfer fo 28 years and I am into photography now that I have DSLR.

Hobby related. I started with the goldfish won at the state fair in the early 70's and had fish only tanks for about 10 years. I got back into the hobby about 15 years ago with a freshwater FO then planted tank. Got a saltwater FOWLR about 2 years later. Got out after about 5 years and then started again 6 years ago with a planted tank, started a FOWLR about a year later and converted it to a reef about 6 months later and have been at is since. 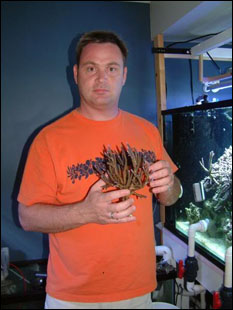 Jason lives in Vancouver, BC Canada. He has been in to saltwater reef-keeping for about 10 years. Jason found 3reef in early 2003 and has stuck around ever since. His reef aquarium is 370 gallons large! Aside from reef-keeping he's a very active cold water scuba diver and has parrots and nasty cats. 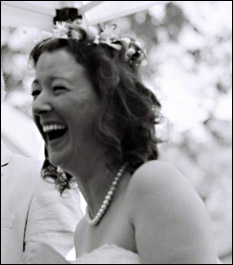 Amcarrig is indeed around, but doesn't have any recent pictures of herself except from her wedding. For now, she thinks she can bang out a quick writeup... amcarrig was born and raised in Long Island, New York and now resides in northern Connecticut with her husband and son. She's been in the hobby for 20 years and currently has a 90 gallon SPS bare-bottom reef tank. That's all she's got. Man, her life is dull. :) 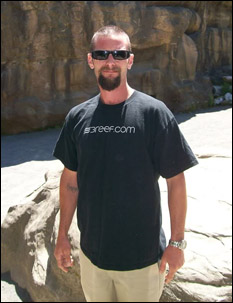 Missionsix is married with no kids and a native of Southern California now residing in beautiful Central Oregon. He has been in the hobby off / on for the last 13 or so years. Missionsix loves anything outdoors and especially loves spending money which is good in this hobby. 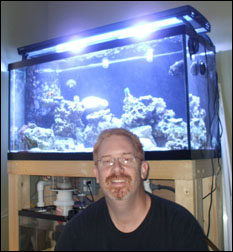 ReefSparky has had the same 55 gallon saltwater aquarium from about 1987 to just a couple of years ago when he decided to go from FOWLR to reef and bought a 90 gallon tank. What captivates him the most about keeping marine aquaria is the diversity of life that is to be found in marine tanks. From the bugs to algaes to the fish, he's hooked! 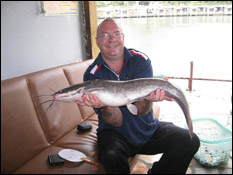 Steve was born in Brighton, Sussex, UK. He relocated to China in 1998 where he still resides. An aquarist since the age of 16, he has had various freshwater setups and species then progressed to saltwater in the early 1990's (UG filters and T10s). Relocation caused a temporary break in the saltwater side of the hobby, having to start again in China with freshwater setups in 1999. Then Steve was back to the salt scene with a vengeance in 2007 when current saltwater tank was set up. 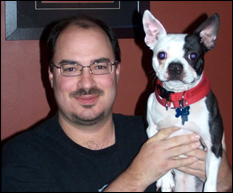 Inwall75 has been involved in the hobby for many years now. He's obviously been a hobbyist. At one time, inwall75 had over 1100 gallons in his house. That's quite a jump considering his first marine aquarium was a 9 gallon eclipse with NO lighting. He's been a wholesale supplier, LFS owner / manager and has spoken at many different reef clubs primarily teaching proper fragging techniques and reef chemistry.